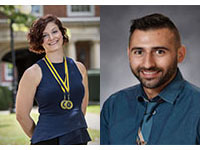 While modern drug treatments allow patients with HIV to maintain undetectable levels of the virus in their blood, it is crucial that HIV-infected patients adhere to their specific drug regimen to avoid developing drug resistance and suffering a resurgence of their HIV viral loads.

In an effort to determine certain factors that influence the rate of medication compliance and support medication adherence, Elaine Loudermilk and Dr. Aaron Salwan have initiated two separate, yet related, projects at ETSU’s Center of Excellence for HIV/AIDS, the clinical arm of the Center of Excellence in Inflammation, Infectious Disease and Immunity (CIIDI). Both projects focus on medication adherence among patients with HIV, but take different approaches.

After completing both her bachelor of science and master of public health degrees at ETSU, Loudermilk is currently a doctoral candidate in the ETSU College of Public Health. Her study is titled “Adverse Childhood Experiences at a HIV clinic in Rural Appalachia: A Pilot Study to Assess HIV/AIDS Treatment Barriers.”

The goal of Loudermilk’s project is to create a customized Adverse Childhood Experiences (ACE) screening tool that specifically encompasses unique ACEs that might be more common among a largely rural, Appalachian, HIV-infected population.

This tool can be used to gather data related to ACEs among the clinic’s patients, but will also be investigated for its effectiveness in gauging patients’ risk of medication non-adherence based on their ACE score.

This project is being mentored by CIIDI members Dr. Megan Quinn and Dr. Shimin Zheng, both associate professors in ETSU’s College of Public Health, and was awarded a Research Development Committee Major Grant from ETSU.

Salwan completed his doctor of pharmacy degree at Ohio Northern University and is a community pharmacy practice research fellow at ETSU Bill Gatton College of Pharmacy, where he is also an adjunct faculty member. He is pursuing a master of public health in community and behavioral health as part of his fellowship training.

Salwan’s project, “ADHERE: Increasing Medication Adherence Among People Living with HIV in Central Appalachia,” will explore the role of technology in supporting patients with HIV by sending motivational text messages designed to remind participants to take their medications.

In addition, he will collect other types of data in order to compare the intervention and control groups. Salwan created custom messaging using CIIDI’s REDCap (a secure web application for building and managing online surveys and databases) combined with the messaging service Twilio to deliver the text messages. Dr. Jonathan Moorman, CIIDI co-director and professor at Quillen College of Medicine, is the principal investigator of record for his study.