Creating the Next Gen of Athletes

ETSU Esports will be hosting online-only tryouts for League of Legends and Overwatch. Registration is open now, so check out our official Discord channels to sign up but act fast!

Online-only tryouts will be hosted by ETSU Esports:

Be sure to watch the games on twitch.tv/etsuesports.

East Tennessee State University is launching a varsity esports program that will begin recruiting and building teams in Spring 2020 and start national competitions in the 2020/2021 academic year. ETSU's varsity teams will compete against other universities in League of Legends and Overwatch. On the academic side of esports,  ETSU is proud to offer a graduate certificate in Esports Management. Keep reading to find out more about student athlete recruitment, future connections to academic programs and related student organizations.

Do you have what it takes to be a varsity esports team member? Maybe you are not a gamer, but you have digital media, communication or other skills. Would you like to volunteer and be a part of the esports experience?
Please fill out the form below if you are interested in being a part of ETSU esports.

ETSU will be building teams during the spring 2020 semester.

League of Legends: 2 teams of 5 players 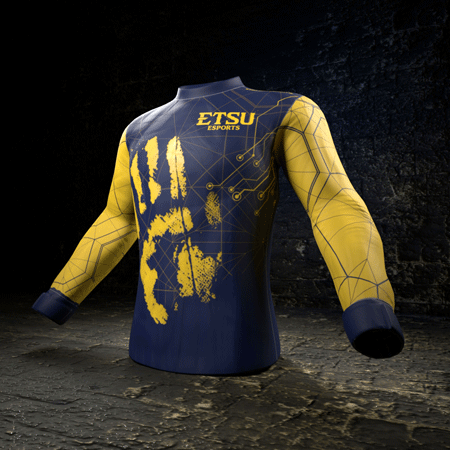 Get more information about tryouts and requirements

The Cave has been an iconic part of ETSU life for decades, now, following a two-year, multimillion-dollar renovation, it will become The CAVE Esports Arena! The facility will be the center of video gaming on campus and the region. Completely re-thought and designed for console, PC, and live board gaming, The Cave's central attraction will be the new ETSU Esports Video Wall measuring a massive 32 feet to accommodate a variety of public display needs, including presentation of gameplay for LIVE esports tournaments!

TOURNAMENTS WITH FULL COVERAGE!
Regular video gaming tournaments will be scheduled in the Cave by both the team and campus gaming organization! Team tournament coverage will be streamed live, complete with live, on-site, play by play announcing on TWITCH.TV and displayed on the massive VIDEO WALL!

Private Practice Facility in the Cave: "Der Rathskeller"
ETSU Esport team members will have a dedicated training facility in the center of the Cave Esports Arena equipped with 14 top of the line performance PCs and an audio visual display that can allow coaches to spotlight each player's machine on a central monitor for review and instruction.

Open Gaming in The Cave
Make no mistake, The Cave is dedicated to open gaming for all students with many table stations equipped with power and internet and nooks featuring monitors waiting for you to plug in! A central hub will be devoted to high end gaming PCs.

THE FUTURE IS HERE! Start your legend with ETSU Esports!

More About Esports at ETSU

All ETSU Students have free access to Minecraft Education Edition!   Learn more about how to get started.  Be sure to use your ETSU email address.

Get Involved For information on all of this and more, see our FAQ page and contact us at esports@etsu.edu.
Tweets by ETSUEsports